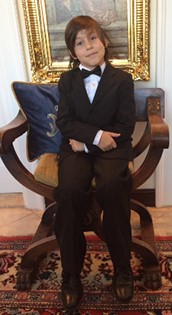 His father, Dr. Attila Molnar Soos, tells us the story.

It all began a year and a half ago. In 2016 March, Kund couldn’t stand on his feet after an upper respiratory tract catarrh. We rushed him to the hospital and he was diagnosed with Perthes disease. This disease can cause breakage of the weakened bone. One of his feet was 2-3 cm shorter than the other and its diameter started to decrease as well.

As Kund became aware of this, he didn’t stand on his foot any more. He said he wants to get well and is protecting his foot. His willpower proved to be exceptional.
The Perthes disease
Osteochondritis Dissecans Juvenilis Coxae is a disease of the developing head of the thigh bone in the hip joint, the femoral head. The top of the thigh bone has a significant impact on the orthopaedic stabilization of the hip, the pressure balance, its optimal distribution and the adequate movement execution. In Perthes disease, there’s a disturbance in blood supply in the femoral head. As a consequence, the bone dies and the femoral head deforms. The blood supply disturbances are most commonly caused by accidents, traumas or as a consequence of fever involving diseases resulting in immune related joint membrane inflammation. The most at risk category is children developing temporary hip joint inflammation after upper respiratory illnesses. In advanced cases, the patient suffers one sided muscle atrophy.
Approximately 18 months before the diagnosis, I noticed that my son’s development slowed down and almost stopped both height and weight wise. His appetite got worse and worse and he only weighed 18 kg at 8 years of age.
Kund was an extremely sensitive child who we should’ve loved more and given more attention to as parents and doctors.
Medically the cause of this disease is unknown. But the specialist books mention that they suspect the BCG vaccine could be causing it.
We waited for 6 months and tried several medicines and calcium supplementation but there was no sign of improvement. As professionals, we did not find the cause of the disease so we started looking for alternative ways.
One year ago we contacted Andras Kovacs-Magyar and Ildiko Kovacs-Magyar’s alternative Matrix Drops Center and seeked advice.
The Matrix Drops Computer scan showed the following information disturbances:
The child was sleeping in geopathic radiation
There was gluten intolerance information disorder
There was medication toxicity overload information disorder
There were heavy metal overload information disorders
Following vaccines there was an autonomy injury
In the family, the computer signalled love flow problems 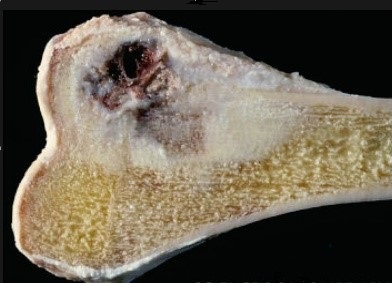 In the case of heavy metal overload, the bone looks like below:
Following the detailed information session, we had a Matrix Drops professional make a house call and he detected the geopathic radiation in our house. As the Matrix Drops Computer showed, Kund was sleeping above a water geopathic zone. After detection we moved his bed straight away to a geopathic stress free zone. We followed strictly the Matrix Drops Protocol, changed our diet, re-organized our work commitments and payed more attention to our family’s emotional needs.
We attended the Matrix Drops Computer scanning as well as started taking the customized Matrix Drops information drops. We tried to change our life by consciously looking for love, friendship, attention, communication and good times. By taking the Matrix Drops information drops, our intuition started to guide us in the right direction. Our son, after taking the customized Matrix Drops, released the heavy metals from his body, Lead, Cadmium, Aluminium, the vaccines’ side effects (BCG, MMR), Lyssinum, Penicillin and was declared fully recovered after a year and a half. He was able to stand on two feet. His feet were the same length. He had X-Rays then as well as before the problems started. It’s very obvious and visible on the X-Rays that the disappearing ball of the thigh bone and the hip bone came to life and regenerated.

For over a year, he hadn’t taken any medication or bone building substances.
As doctors, we couldn’t have imagined that the human body is capable of such regeneration with the help of Matrix Drops cold fusion effects. We learned that this miracle only works if we exclude the causes, the harmful environmental effects.
We came to realize that if we don’t exclude gluten from our diet, it can be a huge contributing factor. As doctors, we only understood then, with our son’s case, the epigenetics we learned from Andras, that the genes are controlled up to 99% by environmental factors. The Matrix Drops Protocol called our attention fully to the negative environmental factors and ways of avoiding them.
Kund told his story as follows:
“The most important things in the world are good mood and joy. I miss real joy in people and in our world today. Everybody is angry, impatient, has a bad mood and is sad or tired. Very few people manage to be happy for a little while. I saw Andras and Ildiko truly happy.”
Dear Ildiko and Andras!
We think of you with love and gratitude. I thank God and you for the hopeful smile on Kund’s face again. After a year he put on 11 kg, now at 9 years of age Kund weighs 28 kg.
I am attaching the previous (2016.03 and 2016 09.) and the present (2017.08) X-Rays. According to the X-Rays, the half circle hole (acetabulum) at the cross point of the top of the thigh bone (caput femoris) and the hip bone, completely regenerated.
With gratitude,
The Molnar Soos Family