918Megtekintés
1Kedvelés
French virologist, Luc Antoine Montagnier is the 2008 Nobel Prize winner in Medicine for his discovery of the human immunodeficiency virus (HIV). 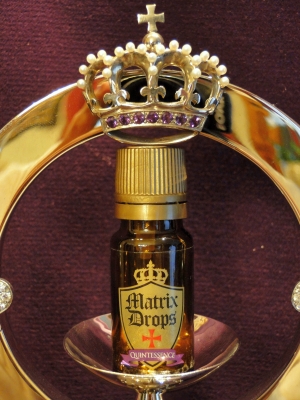 
Reducing it into writing: The DNA solution has a specific electromagnetic radiation that is stored in neighboring water molecules under special circumstances.

Pursuant to that, diluted water that harbored this DNA acquires and mimics similar electromagnetic radiation. Teleportation through electromagnetic fields, until now unknown, has conquered the field of science nowadays. Until now the quantum teleportation record was set at 600 meters by trial in Vienna. Following this trial, other universities’ scientists managed to repeat the same process with a photon pair at 16 kilometers.
Since this process of teleportation has been applied in the preparation process of Matrix Drops for decades, this type and level of recognition is gratifying and important when seen in the public domain of scientific discussion.
With our proprietary quantum physics-based procedure, we are able to liberate information and variance describing our organisms’ 108 elements and teleport and store them into pure water, formulating the Matrix Drops. The Matrix Drops freely transfer precise information to each of the seven bodies and correct possible failures in our organism (or cells that are out of tune). This is analogous to reformatting or restart a computer.
Material information that’s ideally balanced, indicates perfect biological behavior within us.
Symptoms can be experienced on our invisible body, feelings, dissolution of energy obstruction, ways of thinking, and even while settling our relationships.
Today it is possible to measure and chart-out the invisible bodies unseen with the naked eye using the proprietary Matrix Drops Computers. These detect magnetic fields emanating form our bodies, as well as their electron and photon radiation signatures. Once profiled in this manner, the computer assigns a Matrix Drops that contains the most important information to benefit the individual.
At present, the Matrix Drops Computer is able to select from nine hundred different replicates of programmed information. In one minute the computer comes up with eight million data information points about the measured person, following which it assigns the corrective counter-information necessary to the person that is marked by coded numbers. This output is then used by the managing Matrix Drops Computer operator who recommends appropriate drops.
In addition to personalized coded Matrix Drops, the computer generates written reports on findings about manageable problems covering a wide rage of severity - from light to heavy. Impact of the information in the drops can control these computer-discovered unwanted issues. Moreover, Matrix Drops not only helps to manage negative attributes, but unlike any other homeopathy they strengthen our positive attributes.
More detailed information can be found on: www.matrixdrops.com
Matrix Drops Price: gross amount of 3.500 HUF/piece
Availability in our store at: H-1143 Budapest, Tábornok Street 11/a 1st Floor
Phone: (+36) 1 222-3186 or (+36) 1 251-4983
Availability of Matrix Drops Computer (MDC)!

Dr. Ásin Magdolna, phone: +36-26-355-388
e-mail: mmd@matrixdrops.com
When developing the MDC, the primary focus and purpose was ensuring its robustness, the clear understandable phrasing, and its simplified handling.
The MDC system’s usage has no specific technical skill requirements.
If you’re interested in partnerships, Matrix Drops welcomes you in our NEW WORLD!
Kovács - Magyar András

“My currently 15 year old daughter has been in love with a boy, since she was 7 years old.  She talked about him everywhere and even changed school for him. Since she began drinking Matrix Drops number 1 and 4, she called me a month later with news that her beloved started dating the biggest enemy of my daughter. I was worried what would happen with her, but to my surprise she told me that she was not interested in that boy anymore and felt that with the help of Matrix Drops she was able to liberate herself from her obsession.” – H. Tibor –

“A married couple visited me, where the gentleman was having some sexual issues in the relationship and was displaying chaotic behavior.  The Matrix Drops Computer detected that “the take the lead power” is missing from him. He took purple Matrix Drops and within two days the man’s wife contacted me to inform me about many noticeable positive changes.” – T. Sándor –

“What I have realized since I take Matrix Drops is that I see with more clarity the evolution of my relationships. It feels like if someone lifts a veil, and I could see the other’s intentions with clarity.” – B. Tünde -

“A boy from Győr, a city in Hungary, loved to play chess; he was on a winning streak of championships and trophy-cups. However, his relationship with his mother was bad because his mother wanted him to read more, besides just collecting medals. Within a few weeks after taking Matrix Drops the mother informed us that his son started reading books and pursuant to that their relationship become better. Today they both cherish the boy’s success in chess.”

“An elegant and pretty female teacher had a general relationship problem, where only a man was missing from her life. She started taking the Matrix Drops and since men are approaching her. Of course, she realizes something has changed in her and as a result her life has taken a big turn.” – Sz. Márton -

“I have measured a gentleman with the Matrix Drops Computer that detected communication problems and fear from dogs. The gentlemen agreed with all the results and confirmed that in his childhood a dog scarred him. He took Matrix Drops and called me after a month informing me that he was noticeably feeling better and he didn’t tremble from the sight of dogs.”

“My 8th grade school-mates always made fun of me that made me feel bad. In my dreams I had a reflection of the names and faces of those school-mates with whom I haven’t met since 8th grade. I took purple Matrix Drops number 605 and after three days all these old memories were lifted off my chest.” – S.Judit -

“Two weeks before I measured my daughter with my Matrix Drops Computer, to a great surprise it detected behavioral perturbations and concentration problems. I was startled not having noticed that before, and a few days later my daughter brought home her first negative entry into her behavior logbook, as the computer correctly detected. How interesting is that the computer foresaw her emotional changes before they even happened. After three weeks my daughter was the same again, while teachers were back to being pleased with her.” – Edina -

“I always had difficulties waking up in the mornings. I started taking Matrix Drops, and now even before the alarm goes on, I am already awake. I was the most surprised to find myself completely awake at 5:00 am in the morning and doing my chores.” – Sz. Márton -

“A young gentlemen looking for change of work place for months, couldn’t take control over his fears, thoughts, and act decisively. After Matrix Drops analysis detected that his intellectual evolution stopped, and he must make immediate changes, the prescribed drops managed to facilitate him changing jobs in a short period of time.” - B. Tünde –

“The Matrix Drops Computer detected on a European champion athlete, types of emotional and mental problems he was suffering from. Furthermore, it detected emotional problems related to a woman. He admitted that these symptoms are characteristics linked to his wife. He brought with himself the wife’s holograph, something he carried within his soul, and the computer detected that as well. It is amazing how many things we carry in our soul while we think about taking care of our own problem.” – K. András -

“One of my relatives was suffering from self-evaluation problems. We measured him with the Matrix Drops Computer which suggested three types of Matrix Drops. When he went on a vacation, he forgot the drops at home. When he returned he admitted how much he missed the positive effect of the drops, because since he started taking them he felt more secure and determined.” – C. László -

“After marriage I became part of a Transylvanian family. Back then we had a family business, which was destroyed within two years of my marriage. Since this event, I couldn’t even talk to my father-in-law. With my wife’s help we both took purple Matrix Drops number 44. That winter we slaughtered a black pig (“mangalica”) and my father-in-law came from Transylvania to Hungary to help me with the pig, not a frequent habit from him to do in recent years. Our relationship has changed positively.” – S.F. Szabolcs -

“I gave a woman from Nyíregyháza, a region in Hungary, Matrix Drops number 351. She was always stressed and troubled, where even her husband didn’t dare to talk to her. After a week the husband asked me what I gave to her wife, because they are able to comfortably communicate for days now.” - S. Judit -