Emotions locked in a tube: hatred, anger, and grief

109Megtekintés
2Kedvelés
"Only the living can create!"
Professor Elmer Gates at the University of Washington conducted an interesting biochemical experiments in the psychology laboratory. He demonstrated that poisons are produced in the human body triggered by various emotions and feeling patterns.

The professor conducted the following experiment: he cooled test tubes with ice cubes and then individuals in different mental states of mind breathed into the vials.

After a few minutes, the vapor of the exhalation of healthy and spiritually balanced people condensed into a cooled glass tube in the form of colorless drops. But when the individual(s) felt strong anger the condensed liquid became discolored; brown, gray in grief and pink in remorse.
Of course, not only the color but also the chemical composition of the vapor was different.
During the experiments, Professor Gates slowly had enough of the result vapor material to experiment on guinea pigs next. When he injected the brown vapor material into the experimental animal, he became extremely irritable at first and then had a real tantrum, crashing into the cage wall with his teeth. Professor Gates repeated his experiments several times and the results were reproducible. Those who were rampant with strong hatred, the poison excreted from their breath immediately killed the experimental animals.

The professor found that a ten-minute strong hatred (gathers and kills) contained enough poison to kill people. This type of poison is one of the strongest known to science. The human body absorbs the poison formed by negative emotions and thoughts, thus poisoning itself. These toxins, like hormones, are extremely harmful even in the smallest amounts because they accumulate in the body as slag. Whenever anger or hatred pervades the body, it excretes the poison. The poison is undoubtedly intended for the “enemy”. But in such cases, we fall victims when we don’t process our malicious feelings and thoughts. Those who are dominated by evil emotions, their breathing may periodically contain volatile toxins. Their presence can be detected using chemical reagents.

The moment will come in our lives when our former driving forces will not take us forward in our development. You have to wake up: certain emotions like greed, vanity, envy, hate are destructive in character. It is essential to develop new driving forces in ourselves. People's inner values ​​cannot be developed or polished by physical means. It is a way out for all of us to realize there is a hidden solution in within. With our unique method, our intelligence can reach new high levels thank to emotional and mental development. The unconscious person is not looking for solutions to the great conflicts of life on his own, but mostly expects it from someone else. All repressed problem spectrums are self-destructive, persisting, and stuck with us. Change happens when we treat them.

Who should we contact? Most people believe when they seek help, they are perceived weak. Yet, deciding to open up fails in many cases as the emotional conflicts are not resolved. Everyone tells their worries through their specific vision to family and friends. Therefore, for most parts, it’s not possible to help, thus the individual is slowly resigning, ‘there is really no solution’.

He/she who has failed or does not want to reveal his/her soul or emotions to others has the opportunity to look into himself/herself seeking assistance. After all, no one knows us better than ourselves. 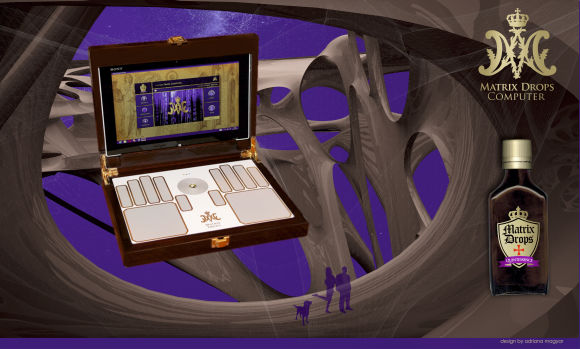 Hundreds of emotional patterns can be identified and detected using the Matrix Drops Computer (MDC). Just like the physical reality we perceive in the mirror reveals our own spiritual nature. The qualities of the human soul remain hidden from the physical senses, but we can gain insight into the mysterious connections through the MDC. With the help of Matrix Drops, the forces that build our character and health can be strengthened and the self-destructive properties can be calmed down and dissolved.